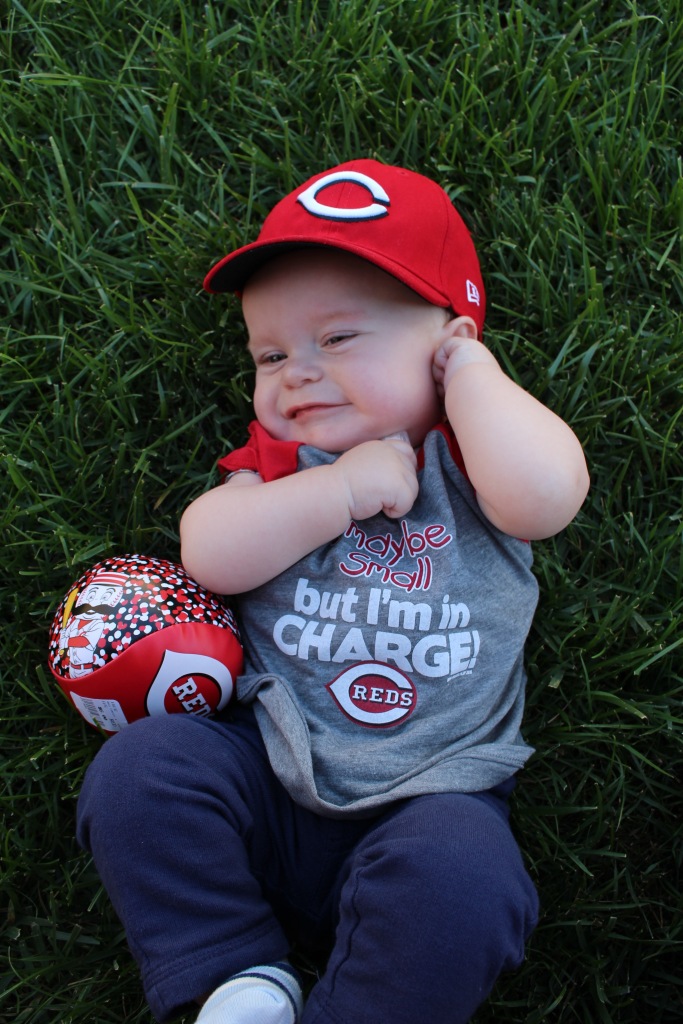 Our busy week at Cincinnati Children’s finally came to an end, and we left with an abundance of information.  The week was busy and exhausting, but truly informing.  Rhett did an awesome job, and was his usual happy self despite all of the poking and prodding he had to endure.  Once again, he never ceases to amaze me.

On Monday, we had another swallow study test done to check for aspiration.  He has had two swallow studies done previously, and both showed that he has slight aspiration when he swallows.  Anything that has to do with feeding stresses me out.  Working on oral feeding has been a huge struggle since the beginning.  Thankfully, Rhett cooperated and we were able to get some good information about his eating.  There are 4 phases of swallowing, and Rhett is having problems in the oral phase.  He will open his mouth to accept food, but he creates a hump with his tongue that prevents him from moving the food from the front of his mouth to the back.  This causes most of his food to come back out of his mouth instead of him swallowing it.  We will have to continue to work on oral motor exercises to help him learn how to move food from the front to the back of his mouth.  Since we were not able to get a good picture of what his swallow looks like by allowing him to take the food off of a spoon, we ended up syringing a small amount to the back of his mouth.  When we did this, we were able to see that he has a nice swallow response.  We also saw no aspiration, thank goodness.  This does not mean he does not aspirate at all, but we were able to see that he is able to swallow small amounts without it going the wrong way.  Once he is able to organize how to move food from the front to the back of his mouth and swallow, we will be able to move up in the volume he is taking by mouth.

On Tuesday, Rhett went under general anesthesia for a chest CT.  We did this in order to check his lung function and to see what his airway looks like.  The pulmonary doctor was very pleased with all that he saw.  Rhett’s lungs and airway look great according to the CT.  We also had a consultation with the pulmonary doctor and GI doctor that would be doing his scopes on Wednesday.  Both doctors went through their part of the procedure and explained what they were looking for.  They were both very informative, and helped calm our nerves about the procedure.

Wednesday was the big day.  He did great during his triple scope with ENT, GI, and pulmonary.  GI scoped his esophagus, stomach, and small intestine.  He was checking for any inflammation or damage that could be caused by reflux.  He said that everything looked great.  He took a biopsy, and we will know the results from that by the end of next week.  Pulmonary scoped his airway and lungs.  We did find that there is some scar tissue at the bottom of his right lung, which was most likely caused by an emergency intubation shortly after he was born.  We will continue to monitor the scar tissue, but we will not do anything about it unless it causes problems.  Everything else that pulmonary looked at checked out fine.  He took a culture of his lungs to make sure there is no fungus or infection growing, but he expects there is not since his lungs were clear.  We will also know the results of the culture by the end of the week.  ENT scoped his nose and his airway looking for any other anatomical differences.  She was able to see his Choanal Atresia, but other than that, she did not find any major differences that will require surgery right away.  We did find that he has more tissue than is normal around his vocal cords and a narrowing in his subglottis that was more than likely caused by the trach.  These are things that we will have to continue to monitor, but hopefully they will grow as he grows and not cause any problems.  These two things might lengthen our time with the trach, but hopefully we will not need any other procedures done to correct them.  We will pray that they will grow as he grows and not cause him any other breathing problems.  Overall, I feel very good about our findings.  I will be talking to the doctors later this week and we will be planning when we will do the surgery to correct the Choanal Atresia.

On Thursday we had a few more consultations before heading home.  We left Cincinnati with an abundance of knowledge, and we know this is the right place for Rhett to have his surgeries done.  Every medical person we came in contact with had wonderful bedside manner, took the time to thoroughly explain things to us, and gave us confidence.  This is the first time that I feel confident in the direction we are moving with Rhett’s care.

We want to thank everyone for the sweet cards and many prayers.  We could feel the prayers pouring over us as we met with each doctor, as we waited for his procedures to be done, and as we listened to results.  We are so blessed to have such a wonderful support system as we continue to embark on this journey.

Have I not commanded you?  Be strong and courageous.  Do not be terrified; do not be discouraged, for the Lord your God will be with you wherever you go.

Hi, I am Anna Martin, and I am a Mindset Coach to mommas of children with disabilities. I help these women find the freedom to live their life in a way that their circumstances do not determine their happiness. I am also a special needs momma, and boy momma to 2 of the sweetest boys in the world. I am here to empower women to be in charge of their life, despite their circumstances. View more posts