After Rhett was born and transferred to Brenner’s Children’s Hospital, one of the first things they did was try to put a feeding tube through his nose instead of through his mouth.  Having the tube go through the nose instead of the mouth is more of the norm in the NICU.  Several nurses tried to get the tube to go through, but once they put it up his nose the tube came back out the same nostril.  Because they could not get the tube through, this led to a CT being ordered to check on Rhett’s structures of his sinuses.  This scan showed Rhett’s Choanal Atresia, which is the reason the tube would not go through the nose since his nasal airway was blocked by membrane tissue.  This scan revealed more information that we were not even looking for.  The CT showed that Rhett had inner ear abnormalities.  We could see that he was missing his semi-circular canals in both ears, and that his left cochlea was not fully formed with the correct amount of coils.  This was our first indication that Rhett may have CHARGE syndrome, which was later confirmed with genetic testing.

Because of the inner ear anomalies, we learned that there was a chance that Rhett’s hearing may be impaired.  We prayed for hearing.  None of our family knew sign language, and the fear of what having a deaf child meant was a very scary thought.  How will we teach him to communicate?  How will I teach others to communicate with him?  There were plenty of thoughts running through my mind, and so I prayed he could hear.

When Rhett had his tracheotomy surgery done at a week old, the audiologist performed an ABR hearing test while he was under anesthesia.  This is a test where they watch the brain’s response to different pitches and volumes of sound.  The results of this test showed that Rhett had mild/moderate hearing loss in the right ear and severe/profound hearing loss in the left ear.  God had answered our prayers.  Rhett could hear, although his hearing was not normal.  We are so thankful for the hearing that Rhett does have, but had he been completely deaf, that would have been okay too.  Having a deaf child would in no way been the worst thing in the world.  I do not want my excitement over having hearing to give the wrong impression.

Rhett had two more ABR hearing tests done during the first year of life, and they also showed very similar results.  At 4 months old, Rhett received a hearing aid for his right ear and we set out to use what hearing he has to help him learn, grow, and communicate.  As he has gotten older and has learned how to do the booth hearing tests, his right ear tests on more of the mild side of hearing loss without his aid in.  With his aid in, his right ear has pretty much normal hearing.  Even though he only has hearing on one side of his head, he does extremely well with hearing, understanding, and communication.  Our current form of communication is sign language since Rhett is not yet verbal due to his trach.  According to Rhett’s last communication assessment, Rhett knows 92 signs.  That assessment was given a few months ago, and I know he has even more signs now.  The amount of signs that Rhett knows and understands impressed all of the doctors in Cincinnati this last trip.  We are currently working with Rhett on how to use the signs he knows to actually communicate with us.  We are working with him on how to do 2 and 3 word phrases in sign.  What I think is even more impressive is that Rhett can hear me say something without seeing me sign, understand what I have said, and either follow the direction (when he wants to since he is a 2 year old) or answer me with a sign.

Again we are beyond thankful for the hearing that Rhett does have with his right ear.  He is doing amazing things even though he lacks hearing on the left side of his head.  We were always told that Rhett did not have a hearing nerve in the left ear, which is why his left ear is deaf.  That information was hard to accept at the beginning when everything was so unknown.  As Rhett grew and developed, we accepted that information and were completely fine with it since Rhett does so well with his right ear.

The first time we traveled to Cincinnati, we met with the ENT that focuses primarily on ears.  He saw how well Rhett interacts with people, and said that he would probably be a great candidate for a Cochlear Implant for his left ear.  That information stopped us in our tracks.  We always understood that Rhett did not have a nerve in that ear, and without a nerve a Cochlear Implant would not work.  The ENT explained that many times CHARGE kids do in fact have the nerve, it might just be smaller or out of place.  Many times radiologists do not see it because they are not trained to zoom in and look at the images.  We left that appointment with a goal to look into doing the implant, if he is in fact a candidate, before he turns 3 years old.

When Rhett’s last scope in November showed that he still had inflammation in his airway, we knew it would be a while before we actually are able to move forward with the airway surgery.  We figured that this would be the perfect time to put his airway on hold and focus on anything we can do for his left ear.  We traveled our 10th trip to Cincinnati the first week of April to have some follow up appointments, and to also do some evaluations to see if we are able to move forward with a Cochlear Implant for Rhett’s left ear.  All the appointments went extremely well, and the doctors were all so impressed with Rhett’s progress.  It is always so encouraging to receive good news when having a week filled with appointments.  The last test that Rhett had that week was an MRI to know if Rhett has a hearing nerve in that ear.  We left that week knowing that all of the doctors were willing to move forward with the Cochlear Implant as long as he has a nerve.  So we left and prayed.  We prayed for God’s will no matter the outcome.  We would love for there to be a nerve so that we can give Rhett every opportunity to sound, but if there wasn’t a nerve we know that Rhett will be just fine too.

After a week of waiting, I finally got a call from the nurse that works with the ENT.  I had already read the imaging results from his online chart, and in the radiologist report it was stated that there was no hearing nerve.  I did not completely give up hope since I had not yet heard from the ENT department.  The ENT zoomed in and studied Rhett’s imaging, which did show a small but present nerve.  We were told that if the nerve was bigger, Rhett would have a better result from a Cochlear Implant.  The doctor recommended moving forward with the Cochlear Implant anyway since it should give Rhett some hearing in that left ear.  So we have decided to do this surgery.  We are now in the process of getting approval from insurance so that we can schedule surgery.  We are hoping to have this surgery sometime in the next few months.

Please continue to pray for Rhett and our family.  This is the first surgery that Dale and I were able to decide about.  This has been tough for us because we are choosing to put Rhett through another surgery.  We feel that we can’t choose to not do it because we want to give Rhett every opportunity possible to help him grow and have a more “normal” life.  Having sound on the left side of his head would benefit him in so many ways.  From being able to hear traffic coming from that side when crossing the street to being able to hear the teacher if she is on that side of the classroom when he begins school.  I feel that if God did not want us to go through with this surgery, there would not have been a nerve.  I feel that God wants us to take advantage of the small but present nerve He blessed Rhett with.  Please pray that insurance is quick to approve this surgery.  Rhett is not a typical candidate, so this could be a process we have to go through in order to get approval.  Please pray for a successful surgery and quick recovery.  Pray that Rhett will be able to have some hearing in that ear once the surgery is done and the implant is activated.  Also pray that Dale and I will continue to feel confident in our decision.  God gave us this special and unique child to care for and love, and we are doing all that we can do in order to do what is best for Rhett.  Thank you for reading this long post, and stay tuned as we embark on this new hearing adventure! 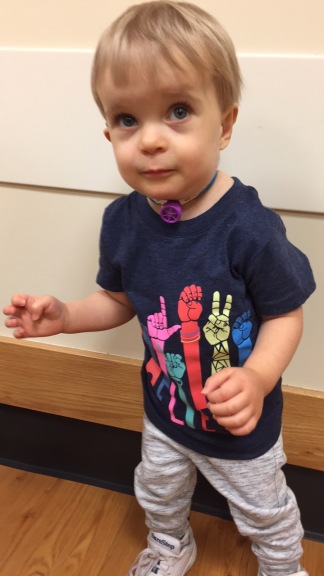