The last week of September we traveled our 12th trip to Cincinnati, and Rhett had his 5th surgery (not counting his routine scopes) to have his cochlear implant placed in his left ear.  This was the longest surgery he has had, and it lasted about 4 hours.  The ENT surgeon was very pleased with how surgery went.  Because of Rhett’s syndrome, a lot of his anatomy is different in comparison to typical children.  From Rhett’s scans and MRI, we knew that his cochlea in the left ear is smaller without as many turns.  The cochlea is the part of the ear that looks like a snail shell.  The surgeon told us that Rhett’s anatomy was not that different than what the anatomy should look like.  Even though his cochlea is slightly smaller than normal, he was still able to get the entire implant placed.  Hopefully this means we will see better results in Rhett’s hearing. 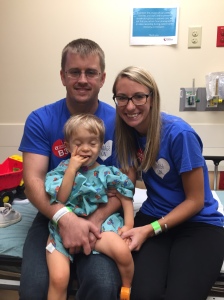 After surgery, Rhett had to wear gauze over the ear held on by a blue headband for three days.  He did not seem to really want to mess with his ear, but he did not like wearing that headband.  He was constantly scratching at his head and pulling the headband off.  Thank goodness he only had to wear it for three days.  He was on an antibiotic for 10 days to help prevent any infection, and we had to clean the incision site twice a day and put Neosporin on it.  He did not seem to be in much pain, and if he ever looked uncomfortable, Tylenol was all he needed. 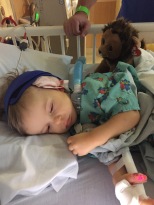 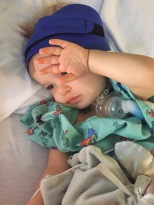 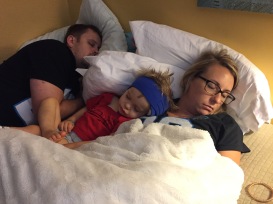 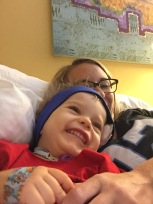 This past week we traveled back to Cincinnati to have a post-op follow up appointment with ENT, and to have his implant activated with the audiologist.  His incision site healed great, and the ENT was pleased with how he healed after surgery.  The implant is now activated, and he now has a piece that looks like a hearing aid on his left ear with the magnetic piece attaching to his head.  When the audiologist was activating the implant and checking on the electrodes, we were seeing some response from Rhett.  He was looking to the left side, and you could tell that he knew something was different.  Now that we are home, I’m not really seeing much of a difference yet.  We have the implant set pretty low right now, and there will be a gradual increase of sound.  They do this at the beginning so that the new sound does not overwhelm the child and make him uncomfortable.  Every 3-4 days, I will turn his implant to the next program which will allow more sound to come in.  Hopefully as Rhett moves through the programs, we will see more and more response to sound.  Our next visit is scheduled for October 30th.  We will meet with audiology again, and Rhett will do some booth testing to see if he is responding to sound on the left side.  We will also set the implant for the next round of programs, and I will continue to move him up through the programs at home. 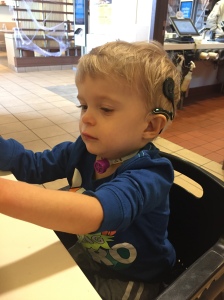 While we were in Cincinnati, Rhett also had a follow up eye appointment.  He has what is called exotropia strabismus, which means he has poor muscle control in his eyes which causes them to turn outwards.  It is basically the opposite of being cross eyed.  We are monitoring this because this could cause poor vision.  Currently, his vision is not being affected by the exotropia.  I am so thankful we are not having to worry about glasses yet.  It is hard enough keeping a hearing aid and now a cochlear implant on a very active toddler.  We did discuss that this is something that normally gets worse.  I am hopeful he will outgrow it, but that does not normally happen.  So we are looking at an eye surgery to correct the exotropia at some point in the future.  He will not require surgery until his eyes are turned outward more than 50% of the time, and he can not bring them back into focus.  Right now he is still able to control it enough that we can get him to bring his eyes back into focus.  Hopefully he can hold off on needing surgery for several years.  We are hoping to wait until at least 4 or 5.

When we go back to Cincinnati in a couple of weeks, we are going to have a clinic visit with our airway ENT’s nurse practitioner.  She is going to check on Rhett’s pressures when using a non-modified passy muir valve (PMV).  The PMV is the purple piece he wears over the trach.  This is a tool to allow someone with a trach to breathe in through the trach, and out through the upper airway.  When Rhett first started using this tool, he needed to have it modified with two tiny drill holes to relieve some of the pressure.  In July, we were able to move him to one drill hole.  We are hoping that he will now be able to tolerate having no holes.  This would mean that his airway is getting stronger, despite the constant inflammation.  We are hoping that if he can progress in this way, he will not need the LTR (major airway surgery) we have been waiting on for over a year.

As always we are asking for your prayers.  Please pray that as Rhett moves through the programs on his Cochlear Implant he will have more access to sound and show response to sound.  Pray that his eyes continue to stay stable so that we do not have to worry about that surgery for a while.  Pray that his pressures allow him to move to the non-modified PMV, and that his airway gets stronger to not require surgery.  Also pray for the upcoming sick season.  Rhett is already battling his first cold.  Pray that he gets well soon, and that he can avoid the hard illnesses this winter.

Thank you for praying for Rhett, and following his journey.  I know we always have an abundance of information, so I appreciate all who takes the time to read these updates.  We are so blessed to have such a loving support system around us as we navigate life with CHARGE.

Hi, I am Anna Martin, and I am a Wellness Coach to mommas of children with disabilities. I help these women find the freedom to live their life in a way that their circumstances do not determine their happiness. I am also navigating my own journey in parenting a medically complex child, and I have the blessing of raising 2 of the sweetest boys in the world. I am here to empower women to be in charge of their life, despite their circumstances. View more posts

2 thoughts on “Rhett is Activated!”